John Henry Schlegel and David A. Westbrook discuss “the adventure of thinking”

From the heights of his long tenure at the University at Buffalo School of Law, in Episode 21 of The Baldy Center Podcast, Distinguished Professor John Schlegel discusses US economic history, American Legal Realism, and his lived experience with legal education over the last half century, in particular, Critical Legal Studies. In this extemporaneous conversation, Del Cotto Professor David Westbrook affectionately provokes Schlegel to grapple with the necessary and complex ongoing negotiations between our concepts of adventure and stability, serious and fun, the endeavor of intellectual freedom... and the Borg. 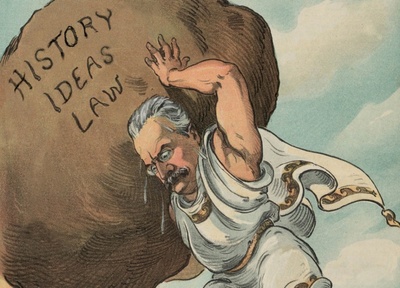 The theme music for this season was composed by University at Buffalo Department of Music PhD student Matias Homar.

John H. Schlegel joined the School of Law faculty in 1973. His primary research interest has been in legal history. For over 20 years his scholarship was focused on the history of legal education and the activities in the 1920s and ’30s of a group of scholars at Columbia, Yale and Johns Hopkins universities known as the American Legal Realists. His current project, a book on law and economy in the United States since the Civil War, attempts to understand change in the national economy and its social consequences, using Buffalo as a case study.

David A. Westbrook thinks and writes about the social and intellectual consequences of contemporary political economy. His work influences numerous disciplines, including law, economics, finance, sociology, anthropology, cultural studies and design. He has spoken on six continents to academics, business and financial leaders, members of the security community, civil institutions and governments, often with the sponsorship of the U.S. State Department. Westbrook has published many books.

Edgar Girtain is host/producer of the 2021-22 Edition of The Baldy Center Podcast. He is a PhD student in the music department at SUNY Buffalo, where he studies with David Felder. Girtain is a director of the Casa de Las Artes at the University of Southern Chile (UACh), and president of the Southern Chilean Composers Forum (FoCo Sur).He is an eminent composer, pianist, and writer of his own biographies. Girtain's diverse areas of work are often collaborative, cross-disciplinary, and international in ambition if not in practice.